We hired fundraising consultant Lauri Rose Tanner to give us critique and advice for fundraising. The primary advice was to get our website updated and more user friendly.

Rosangela and Georgeann worked on a preliminary update plan for the blog and membership levels. We then turned it over to a web designer in Santa Fe and by March we had a much improved website. www.thewww.mayaconservancy.org features an easy JOIN feature, a blog, a Recommended Books page which features books written by our Board Members, and a Membership Levels page. Dr. Robert Sitler’s book, The Living Maya, came out, as well as Gaspar Gonzalez’es 13 B’aktun. Later in the year, Board Member Francisco Estrada Belli’s book “The First Maya Civilization: Ritual and Power Before the Classic Period” came out.

Both Mary Lou and Georgeann went to New York for the annual Explorer’s club week-end including the inimitable amazing show for the Annual Dinner. This year’s Honorary Award went to a fellow named Wade Davis. He is an incredible explorer for our times.

In addition to exploring in Peru, the Amazon, the Himalayas, Central Asia, Borneo, and more, Davis’es great work is in promoting awareness of the threats to indigenous cultures and languages. To our knowledge he is the first person to be honored by the Explorer’es Club for his exploration of threatened cultures and their languages. Davis is also a beautiful and poetic writer and Mary Lou has incorporated some of his tales into her cruise ship lectures. From NYC, Georgeann went to Austin to attend the UT Maya meetings. She was joined there by Board Members Garth Norman and wife

Cheryl, and Robert Sitler and wife June. The Normans and Georgeann attended the excellent pre-conference workshop of Dr. Allen Christianson on the Popul Vuh. Also we attended an afternoon of a presentation by Barbara McLeod on the latest deciphering of the Tortuguero Monument 6 and its infamous Dec 21, 2012 date. Her rendering at that time was god “9 Bolon Yokte will come down and be investitured.” While the epigraphers at the meeting debated the eroded glyph, Advisory Board Member John Major Jenkins was in Villahermosa photographing Tortuguero 6 in the museum. For further info: http://www.thecenterfor2012studies.com/T6Monument.pdf

Garth and Cheryl Norman attended the Maya Meetings at the U. of Texas and were also in Allen Cristensen’s Popul Vuh workshop. Later in March, Garth presented a paper on the Izapa Calendar at the SAA Symposium in Sacramento, Ca.

Mary Lou began traveling to Tapachula every week for a series of lectures given by Abelino Becerra, a local Ingeniero who has mastered the knowledge of Izapa, its history and cosmology. Between 75 and 100 Tuxtla Chico and Tapachultecos attended his lectures, and this has been of great value to increasing the knowledge and enthusiasm of the citizens for their site of Izapa.

Mary Lou continued attending the Abelino Becerra workshops in June. At the end of June, Georgeann, and Martha Donnelly flew to Tapachula for two reasons. One was to sign the official papers of the Mexican non-profit, Museo Izapa; Mary Lou, John Mann, Georgeann, and our accountant, Gloria Galvez, are the officers in this association. The purpose of this non-profit is to gather funds from Tapachula citizens and other Mexicans. We now have the appropriate non-profits in Mexico, Guatemala, and the United States. The Maya Conservancy, of the USA, is our principal fund-raising branch. We all attended the 4th workshop of Abelino Becerra…on Maya Cosmology. And we are all impressed with the depth and breadth of his knowledge on Izapa and the Soconusco coast. His presentations have really galvanized the interest and understanding of the local citizens. We then went out to the property for Martha and John Mann to measure trees and landmarks on the 2 acre parcel with a future Visitor’s Center and small museum in mind. Martha is a landscape architect by profession and an architectural design artist by inclination. Her plans for a botanical garden, Visitor’s Center, and small Museum are on our website. Martha has been a welcome addition to our “team”, and has donated time, money, skills, and great enthusiasm to our efforts. Also on this visit we attended the local Rotary Club meeting. Mary Lou gave a talk there on the importance of Izapa and building a Visitor’s Center. The idea was warmly received, as were we. The local Guatemalan consul in Tapachula, Mexico has offered to help us get 2 day visas for the Maya spiritual guides to accompany us.

Board member Laura Rodriguez went to Momostenango to learn some Quiche and study the Tzolk’in with Tat Rigoberto and others. Mary Lou met with archeologist Hector Neff who has studied the ceramics of the Soconusco coast. Hector had participated in a LIDAR survey of Izapa. This technique can “see” through vegetation (tree canopies, etc) and it has revealed that there is a huge area of Izapa that is still “under the ground”.

Mary Lou flew to Tuxla Guiterrez to meet with Emiliano Gallega, the director of INAH (Instituto Nacional de Antropologia y Historia). The meeting was to ascertain the property lines of “Rancho Guadalupe”, the parcel she bought for a future museum. The result was that part of the parcel is inside INAH’s jurisdiction, and part is outside the jurisdiction. So we can build on the private part, as well as have Sacred Fire Ceremonies there. AUGUST 12TH, 3114 B.C., THE NIGHT OF CREATION in the Maya Cosmology /Calendar. Martha and Georgeann again flew to Tapachula for this event. Mary Lou, John Mann, Diego Dougherty, Rosangela, Laura, and others drove up from Antigua for this event. We held a Sacred Fire Ceremony on the property at the perimeter of Group B in the zone of Izapa. There were problems with visas for the Momostenango elders, but we were fortunate in contacting Zunil elders who had appropriate visas. Roberto Poz, Ixquiq, Don Pascual, and Sofia created a wonderful ritual and about 70 people from Tapachula and Tuxtla Chico participated. In the afternoon we were invited by the Planetarium staff to attend a show that replicated the Night Sky of August 12th, 3114 B.C. What a wonder to see Orion, the “Turtle”, the Dark Rift, etc. We also were shown a different show that was programmed by John Major Jenkins to show the Night Sky of Dec 21,2012. The precessional cycle of 26,000 years was explained and one could see the Winter Solstice sun slowly crossing the Dark Rift of the Milky Way. (This is all from our own earthly perspective, of course.) It is a fortunate coincidence that Tapachula has a planetarium to help understand the ancient and contemporary Night Skys. Laura Rodriguez stayed behind in Tapachula after this event. She had a very busy week and, with the help of Edgar Laura met with several groups of business and civic leaders to help explain the goals of The Maya Conservancy. This social networking was invaluable to TMC as it helped lay the groundwork for future fundraising and educational efforts.

Mary Lou went to the Explorer’s Club of Southern Florida to speak about Maya Cosmology. She also went to San Miguel Allende and and gave talks there about Ancient Mesoamerican trade routes and “Understanding 2012″. Also she and Jades, S.A, were doing the preliminary work for the October conference on 2012 travel. The Normans were back in Chiapas in September. Garth was invited by the Governor of Chiapas to be a keynote speaker at a conference called “Chiapas—Corazon de Mesoamerica”. On short notice they were able to prepare a PP presentation on the Izapa Calendar and its far-reaching influence throughout the Americas. While in Tapachula, Garth attended a Town Council meeting where he spoke about his many years of going to Izapa to study the stone monuments. Also he presented a PPP that showed the 15* North latitude that marks the overhead Zenith passages of April 30th and August 13th. These are the overhead Zenith dates that are the foundation of the 260 day Tzolk’in calendar. He also spoke about Stelae 5 and its markings of Five World Ages. Later in the month the Normans went to West Valley City, Utah, for an unveiling of a Stela 5 replica.

Mary Lou went to Ft. Lauderdale, Florida to speak to the explorer club of the Southern Florida. She also gave a talk at the Rotary Club of Ft. Lauderdale. She spoke on Ancient Mesoamerican trade routes where Jade, Cacao, Jaguar skins, and Long Calendar dates traveled out from Izapa, Chiapas.

She met with Paul Schuler, a head of a non-profit for clean Caribbean and Americas. www.cleancaribbean.org/about_us.htm He was interested in building his connections with the Mesoamerican world.

She continued her heavy cruise ship schedule. On the ships headed towards Tapachula, She had enthusiastic crowds of Around 500 people. Like everyone, they had never heard of Izapa and its importance to Mesoamerican history.

Mary Lou traveled to Copenhagen to attend the Mesoamerican Wayeb Conference. During the conference she talked with people about TMC and hand out brochure and DVDs. Oscar had prepared a special 4 minute DVD that highlights some of the archaeological and Tourist highlights of Guatemala. Later she went to San Miguel Allende for Xmas with the family. There the excitement of the arrival of the newly book, “The Stone of Kings”, by Gerard Helferich, was high. The book contains Mary Lou and Jay´s story of the discovery of Jade and the building of a renaissance of a national heritage. Mary Lou also gave two of her talks about Maya Cosmology and raised some money for TMC. And she met with Sergio Martinez Echeverria in Mexico City, Sergio is the Director of an Association in Mexico who promotes education and knowledge about the Maya 2012 Calender. www.calendariomaya2012.org 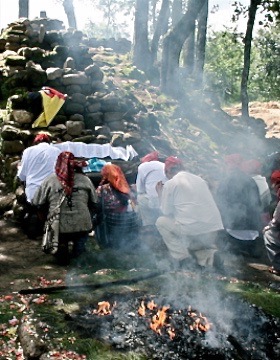