An introduction to Izapa

The archaeological site of Izapa was the most important as well as one of the largest of the pre-hispanic settlements of southern Chiapas, the Pacific coast, and a considerable part of Central America during the Preclassic or Formative Period. The various material expressions present at Izapa manifest great cultural advancement and social complexity, in the absence of which it would be impossible to envision the beginnings, characteristics, and development of the many peoples and societies that constitute pre-hispanic Mesoamerica.

The origins of Izapa circa 1500 B.C. remained buried and forgotten for many centuries after its abandonment somewhere around A.D. 1200. Nevertheless, at this site you can recognize elements that permit you to infer, if not the origins, at least one of the earliest manifestations of one of the cosmogonic and creation myths that gave unity and cultural identity to the peoples of southern Mexico, Guatemala, and Honduras. In some of the extraordinary sculptured monuments discovered at Izapa, scholars have identified elements and characters from the Popol Vuh, the sacred book of the Quiche Maya of Guatemala. The archaeological wealth of Izapa is evident in the massive pyramidal structures scattered across the site, the great platforms built of packed earth veneered with stone, the dozens of sculptural elements such as stelae, thrones, and altars, all of which can be enjoyed by the visitor and appreciated as but a small sample of the importance of the site.  Cutting edge research, both national and international, has recognized the importance of Izapa for understanding and explaining the development of the cultures such as the Olmec that anteceded it or were contemporaneous, while the societies that followed Izapa inherited characteristic cultural features that helped define a vast and complex cultural zone known as the Maya area. The Classic Maya would be difficult or even impossible to understand without our knowledge of Izapa and other communities that developed an original and advanced culture on the coastal plains of the Soconusco.

Izapa is located in the eastern portion of the of Soconusco region, just a few kilometers from the Guatemala-Mexico border and less than 40 km from the Pacific Ocean coastline. It falls within the municipality of Tuxtla Chico lying at 14º 54’ North latitude and 92º 11’ West longitude (UTM E587700/1648700), along the shore of the river that gives its name to the site and in a piedmont area at 200 meters above sea level, where the terrain begins to rise towards the Sierra Madre. Here, the majestic Tacana, a volcano that reaches an altitude of just over 4,100 meters above sea level, dominates the landscape. Izapa has access to a great diversity of faunal and floral resources, with a predominance of humid tropical forest, mangroves with mahogany and cedar, amongst other tree species. Along the river margins there is an abundance of volcanic rock, which was readily available for construction projects during more than 2700 years of occupation at the site.

The soils, although thin, were very fertile, which along with the abundant rains (an average of 3,596 mm annually) turned the coastal plains into an important producer of cacao and other staples. These without doubt must have been important economic resources since pre-hispanic times, allowing the population of Izapa to trade for obsidian and other goods necessary for their subsistence.

The first archaeological investigations at Izapa were carried out by Karl Ruppert in the 1930s and by the renowned A.V. Kidder of the Carnegie Institution. In 1941 Mathew Stirling visited Izapa, photographing and recording the site; his reports were published in 1943. A few years later, Philip Drucker carried out the first archaeological explorations on some of the site’s structures. His results were published in 1947. During the decade of the 1960s various archaeologists from the New World Archaeological Foundation, then under the direction of Gareth Lowe, conducted more systematic explorations.  Through these early explorations the antiquity and importance of Izapa to an understanding of the transition between the early Olmec civilization and the Classic Maya became apparent. In fact, there are but a few sites in Mexico (La Venta and Chiapa de Corzo, amongst others) and Guatemala (Kaminaljuyu, Abaj Takalik, and El Baul), that share some of the features present at Izapa, which permit the understanding of the development of prehispanic Mesoamerica, particularly in the Maya area.

The characteristics of Izapa pertain to those human groups that shared with and effectively succeeded the ancient Olmec of 1200-900 B.C. In addition to the pyramidal structures, massive platforms, and site layout and orientation, contemporaneous sites share other features like magnificently sculptured stone monuments such as the numerous stelae, altars, and thrones present at Izapa.  Through various means archaeologists have established the origins of settlement at Izapa dating back to 1500 B.C., having their apogee between 650 B.C. – A.D. 100 (Middle and Late Formative to Protoclassic). Around the first centuries A.D., Izapa began to lose the supremacy that had turned it into a regional capital, but its occupation continued until A.D. 1200. This makes Izapa unique in the Mesoamerican world — a site that was inhabited for almost three millennia.

The “Izapa Style”  Izapa and the contemporaneous sites mentioned above are renowned precisely on the basis of their sculptural corpus that defines the so-called “Izapa Style.” In several of these monuments, the cosmological elements that will be adopted by latter Mesoamerican peoples are clearly present. The narrative scenes in the sculptured stones of Izapa could be considered as one of the earliest expressions of writing and a calendar system. It is likely that in Izapa and other contemporaneous sites many of the myths concerning the origin of the universe may have originated. These myths would provide cultural unity across the vast Maya regions, extending or sharing various elements with other societies of Mesoamerica. There is little doubt that many of the scenes depicted in the sculptural art of Izapa represent creation scenes, and in some cases they constitute the underlying themes that will recur in passages of the Popol Vuh, the sacred book of the Quiche Maya.

No other site from the same time period has preserved so many sculptural representations, stelae, altars, and thrones as Izapa; for this reason alone, the site has given its name to the sculptural style. The distinctiveness of this style lies mainly in the expressive strength that is accomplished by low-relief carving and to a lesser extent by sculpture in the round, which is the result of a local development and at the same time, as some scholars suggest, the product of shared elements with other communities that were part of an extensive and complex network of cultural and commercial interrelationships.  Up to the present day, 271 sculptures have been recorded. These include twenty-one stelae, six altars, and two thrones, all of these with magnificent carved motifs in low relief. Thirteen other miscellaneous sculptures and monuments have also been recorded, plain stelae and altars, including a significant number of fragmented stelae, and other minor sculptural elements. Dispersed amongst the three architectural groups that can be visited are examples of sculptures on the round, stelae, plain altars, petroglyphs, and monolithic troughs and rims associated with springs.

The pre-hispanic settlement and what we can consider the urban center of Izapa was much larger than what is presently open to the public, which archaeologists have divided into eight architectural groups (termed Groups A, B, C, D, E, F, G, and H). Only a few of these groups have been partially explored, nevertheless revealing a complex and advanced planning that could well be considered as the beginning of urbanism in Mesoamerica.

The principal public and ceremonial buildings of the center are found in these architectural groups.

These also represent the largest constructions of their time along the Pacific coast and part of Central America.  These consist of basal structures that supported a temple on their summit; in some cases these were set upon massive platforms laid out around thirteen great plazas arranged along the four cardinal points. The basal structures were constructed with packed dirt covered with a veneer of river cobbles; the majority of these structures are oriented due north with a slight deviation to the east.  The core area of Izapa is formed by Groups A to E, G and H, which correspond to the period of the greatest apogee of the site, circa 300 B.C. to 50 B.C. Group F contains a ball court amongst other structures, and corresponds to the late occupational phase of the site (between 50 B.C. to A.D. 100). Group H contains one of the largest plazas of the site, measuring 205 meters from north to south and 85 meters from east to west. It is limited to the north and south by two of the largest structures of the site, Structures 60 and 25, the latter explored by the New World Archaeological Foundation in 1963.

Population and language at Izapa

The population at Izapa has been estimated in 10,000 persons during its period of maximum apogee. A significant part of this population must have settled around the core area along an extensive zone that must have contained hundreds of dwellings constructed atop small platforms. Soil fertility and climatic conditions must have favored cacao production and other staples that the Izapeños exchanged for exotic products coming from afar, contributing in the process to the development of commerce, the economic growth of the center, and eventually of the population. Various scholars believe that the inhabitants of Izapa must have spoken a form of the Mixe language.

Izapa: The creators of the calendar system

Some scholars have proposed that the people that built Izapa were also the creators of the calendar system. Several elements and arguments sustain this idea, for example, on August 13 and April 29, which are two very significant days for the Mesoamerican peoples, the zenith passage of the sun takes place at Izapa. It is worth mentioning that the “beginnings of time” or of the “counting of time” (better known to archaeologists as the Long Count), began precisely on August 13, 3114 B.C.. This implies that the Mesoamerican calendar system had its origin in Izapa.  This system acquired such importance that many of the most important sites of ancient Mesoamérica laid out their structures following this conception, that is, orienting their buildings in commemoration of the basic principles of the calendar system. 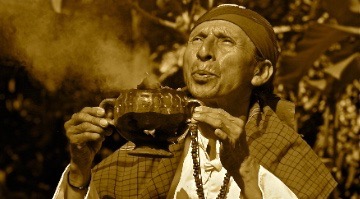