The Maya Conservancy Accomplishments of 2010

Happy Holidays From The Maya Conservancy

Thank you to all the contributors to the Maya Conservancy and a special thank you to Caroline Durston, Marita and Peter Prandoni for your generous contributions.

Our first year has been a whirlwind of activities. It has been important to get off to a fast start even if that, de facto, has meant piecemeal efforts. JANUARY-Our board members signed on and we formulated our long and short term goals. During various discussions, we realized that focusing on “Preservation” meant contemporary Maya cultural traditions as well as on archaeological sites. Oscar Palencia and Jake Ridinger did a field trip for photography.

FEBRUARY– David Bau helped design our website. By the invitation of elders from Momostenango, a small group of us attended the Wakiq Batz, New Year celebration of the Tzolkin, Sacred Calendar. This Feb.3-8 trip to momostenango included Mary Lou Ridinger, Vinny Stanzione, Janelle Proshaw, David Bau, Jim Reed, Oscar Palencia and Raquel Perez. It felt “right” to start our MC group with this very special event. Moving from the sacred to the mundane realities we also formally opened our bank account and Claudia Boles is our official treasurer.

APRIL…- We purchased Finca Guadalupe at the site of Izapa. This is a potential site for a Visitor’s Center in Izapa. Mary Lou attended the University of Pennsylvania Maya Meetings and picked up the first of our Maya Conservancy brochures from her cousin Jack Armstrong who printed them off for her and delivered to her in Philadelphia. She then went to Chicago and joined Karen Reichensberger and they drove the school bus to St. Louis, Missouri for the five day annual Conference of the Society for American Archaeology. There Board Member John Major Jenkins presented a paper on the Tortuguero monument and its 2012 date correlations. At the conference John and Board Member Garth Norman met for the first time and dove into an interesting conversation on their mutual passion of Izapa. This meeting laid some good ground work for our June trip to Izapa.

MAY … Tom Fouke and Chris Novela drove the school bus through Mexico to the border. After border brouhaha, the bus arrived in Antigua. The bus was “detailed”and painted with Maya Cosmovision themes. First Tat Rigoberto’s trips and efforts to obtain permits at the Mexican Consul in Guatemala city came to no avail. Rosangela Corado’s hard work with various levels of Mexican bureaucracy in Mexico itself finally resulted in obtaining permits for 13 maya spiritual guides to travel into Mexico for our June Summer solstice mission.

JUNE…Our MISSION IZAPA TRIP TOOK PLACE!. Welcome dinner-day presentations occured over the week-end. A small Sacred Fire at the 400 year old convent of Sir Juana started off our greetings and presentations. There were 36 of us in all, traveling in two buses and a van.Winding through flood-drenched roads and detours we celebrated Sacred Fire ceremonies at Iximche, Santiago Atitlan, Takalik Abaj, Izapa. Most likely each person on the trip could speak to the poetry of the heart and prose of the mind that permeated our experiences.

After the profound Sacred Fire Ceremony next to the Ball Court of Izapa, joined by Rodolfo Juan and other Tapachulans, the group was greeted at the city Presedencia as Guests of Honor. The mayor of Tapachula, Ezequiel Saul Orduña Morga, and City Council, university associates, and journalists greeted us graciously and made each person an official “Honored Guest of Tapachula”. The legal status of our Mexican affiliate, “Izapa Cosmovision” was finished with Rodolfo Juan, Mary Lou Ridinger, Garth Norman, and John Major Jenkins on the Board.

The trip was finished in Momostenango where the Maya spiritual guides completed their mission of six sacred fires including the first Sacred Fire at Izapa, spiritual/cultural home of the Ancestors, in over 1,000 years. The trip was also concluded with Tat Rigoberto Itzep becoming a Board Member of  The Maya Conservancy. On the trip back to Antigua we had our First Board Meeting on the bus.

JULY…David Bau and Dan Palmer opened up the Mirador Gallery in Santa Fe. Board Members Marita and Peter Prandoni, Mary Lou Ridinger, Georgeann Johnson, and David, of course, attended the Grand Opening. Mary Lou gave a great talk about her experience of jade discovery, starting a buisness, and the ardorous path of putting “Maya Jade On the Map”. The Mirador will be helping to spread the word of The Maya Conservancy.

Mary Lou also attended the July 25-28 opening of the “Maya Fiery Pool” exhibit at the Kimbell Museum in Ft. Worth, Texas. Claudia Boles joined her there and they made contacts for future fund raising.

AUGUST….The Mission Izapa Film Crew…Franceso Taboada, Fernanda Robinson, Laura Rodriguez, and Atahualpa Caldera, worked on an eight minute film of our Mission Izapa trip. This can be used as promotion for The Maya Conservancy and its goals. Mary Lou held a fundrasing talk at the Mirador Gallery in Santa Fe.

SEPTEMBER….Georgeann went to the Maya at the Playa Conference in Palm Beach, Florida. There she met up with Board Members Robert Sitler, Jim Reed, Mark Van Stone. All of them were presenters at the Conference. The Mission Izapa DVD and Jim’s Understanding 2012 DVD’s were sold and an email list of contacts was made. The legalization of the Guatemalan arm of The Maya Conservancy, Conservacion Maya, was made.

OCTOBER….The Maya Conservancy was represented in a booth at the large annual conference of BIONEERS. A 3,000 attendee conference of cutting-edge speakers on “A Sustainable Future” was there. Mary Lou and Georgeann met a lot of people, sold some jade, books, and DVD’s, gave out brochures and made a list of contacts for TMC. A young friend, Masumi Patzel, helped immensely in the booth. Jim Reed organized a Mission Momos-Copan in order to attend the Wakiq Batz at Momostenango. It was a successful trip. Board Member Vinny Stanzione was an integral part of the trip, as well as Board Members David Sedat and Garth Norman. The Maya Spiritual Guides, Antolin Gonzalez and Nicolasa Chumil and their children were also a wonderful part of the trip.

NOVEMBER… the finalization of the Guatemalan Conservacion Maya and the opening of that bank account.

DECEMBER…. On December 3, Rodolfo Juan Sr. and Tat Rigoberto Itzep held a Día de la Mujer Event in Izapa with collaboration of thirteen Maya spiritual guides. The event was held at the Izapa Archeological site and some 200 schools children and teachers attended. On December 13th, a fundraiser for Maya Conservancy will be held. We will have a fire ceremony and photo exhibit. 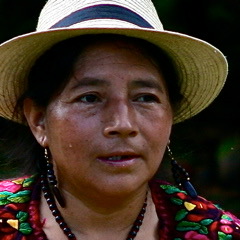